What's with all the white people in Broadway Plaza's promotional renderings?

While trying to make my way around Broadway Plaza this past weekend, as construction on the massive expansion continues, I passed along a temporary walkway to move people from the parking garage to Macy's. 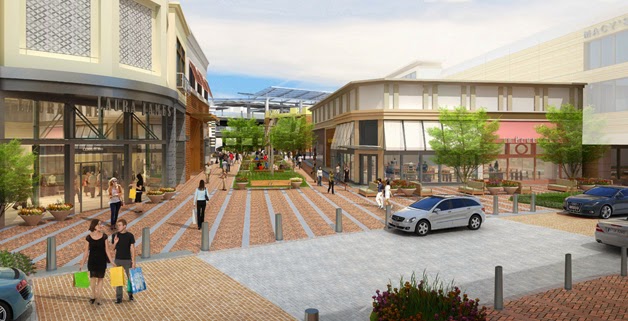 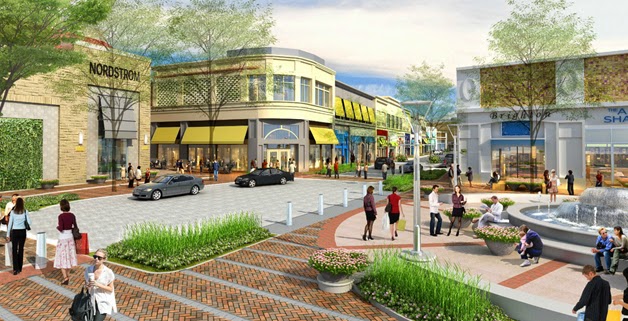 To decorate the walkway, Broadway Plaza has hung renderings of what different parts of the center will look like once redevelopment is finished by the spring of 2017. These images also appear on Broadway Plaza's website. They are promotional and idealized and show gracious walkways, fountains and landscaping and identify a few high-end retailers. 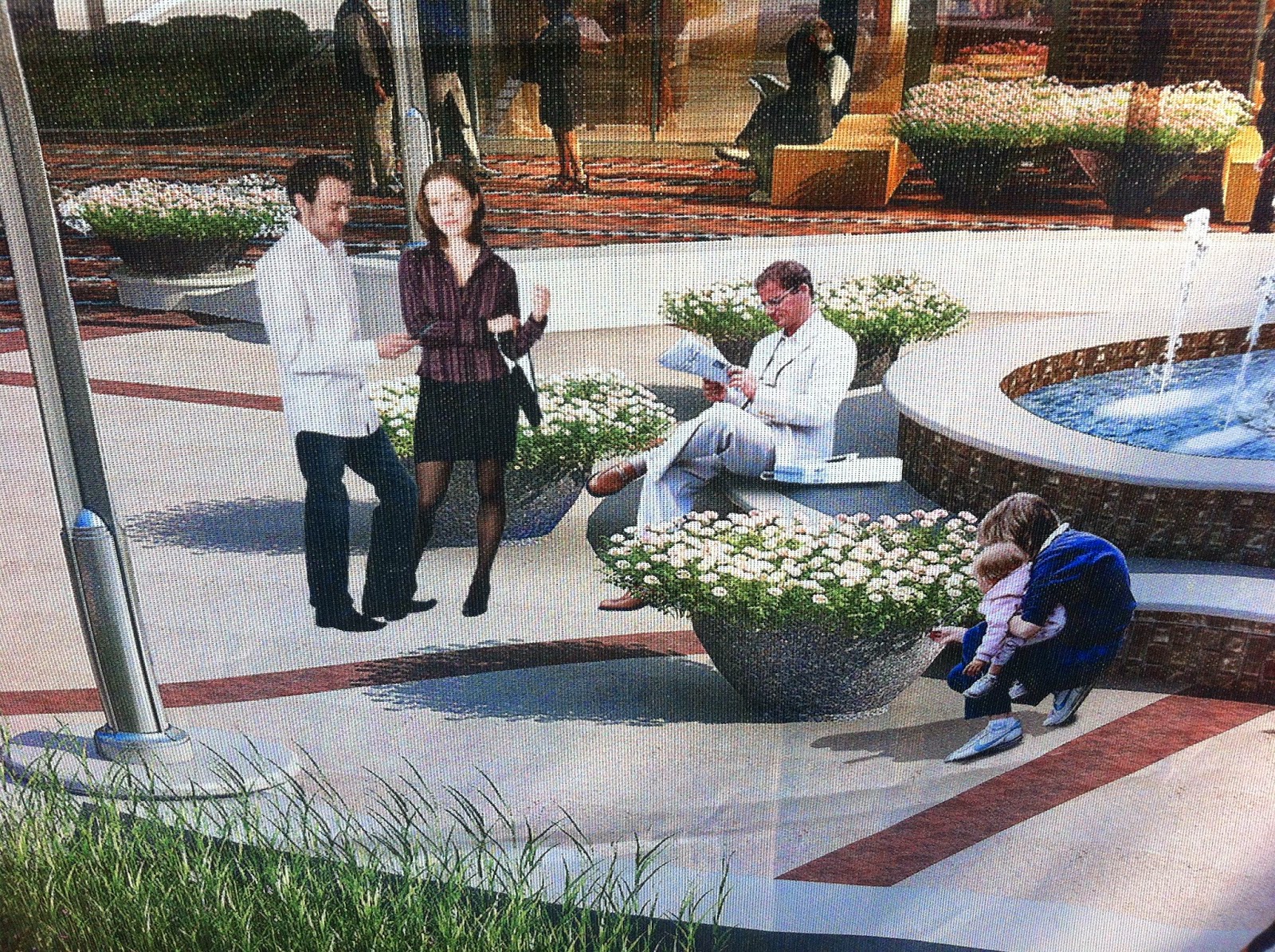 When I first looked at the renderings in person, all I could see were crowds of white faces. And I thought, huh. Really? In 2015? That's the image of Walnut Creek that Broadway Plaza is trying to present? Especially when it no longer represents the population of Walnut Creek, or even of Broadway Plaza shoppers?

I tried again to look closer at the renderings. I finally zoomed in on one Asian woman -- off in a far right corner of one the pictures. And maybe there were a couple men of color -- possibly African American or Latino -- in other renderings but their faces aren't very prominent, turned away from the viewer or indistinct and in the shadows. 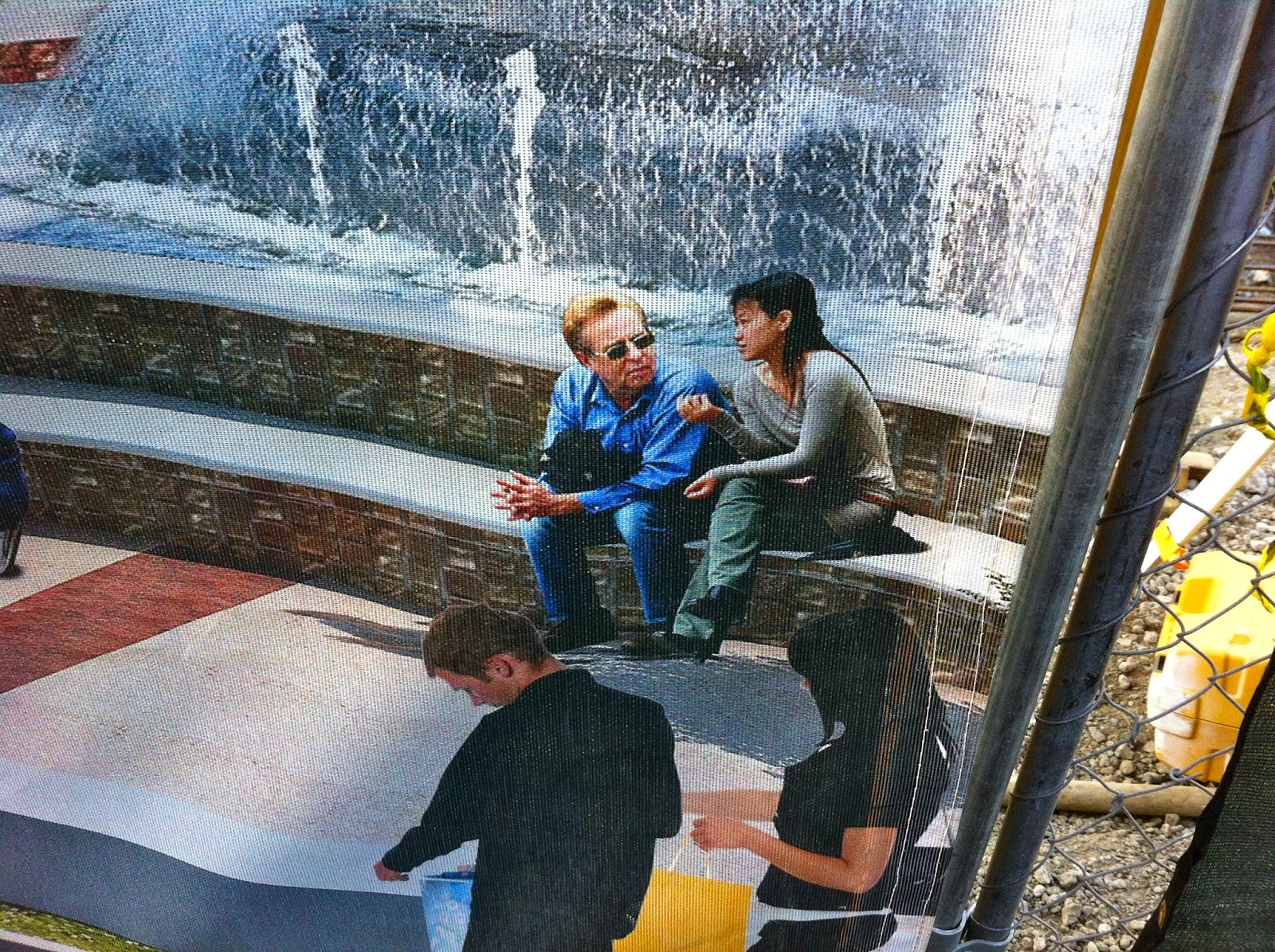 
The city has been in a frenzy of building and going upscale for the past few years. This frenzy has made the city, to some residents, unlivable because of the crowds, traffic, parking headaches and urbanizing skyline. To others, Walnut Creek seems to be transforming into a place that's unwelcome to anyone who's not well-off. Basically, the complaints go, low-income or working-class people are being priced out of housing and "luxury" developments. Their only purpose to coming into the city is to bus dishes at restaurants, clean residents' houses or do yard work.

UPDATE 4/1: The Contra Costa Times ran this really great story about an extended Latino family who are being forced to leave their low-cost rental housing across Ygnacio Valley Road from BART; their homes will be razed to accommodate 178 new apartments, some which will go for $1,900 to $2,900 a month. 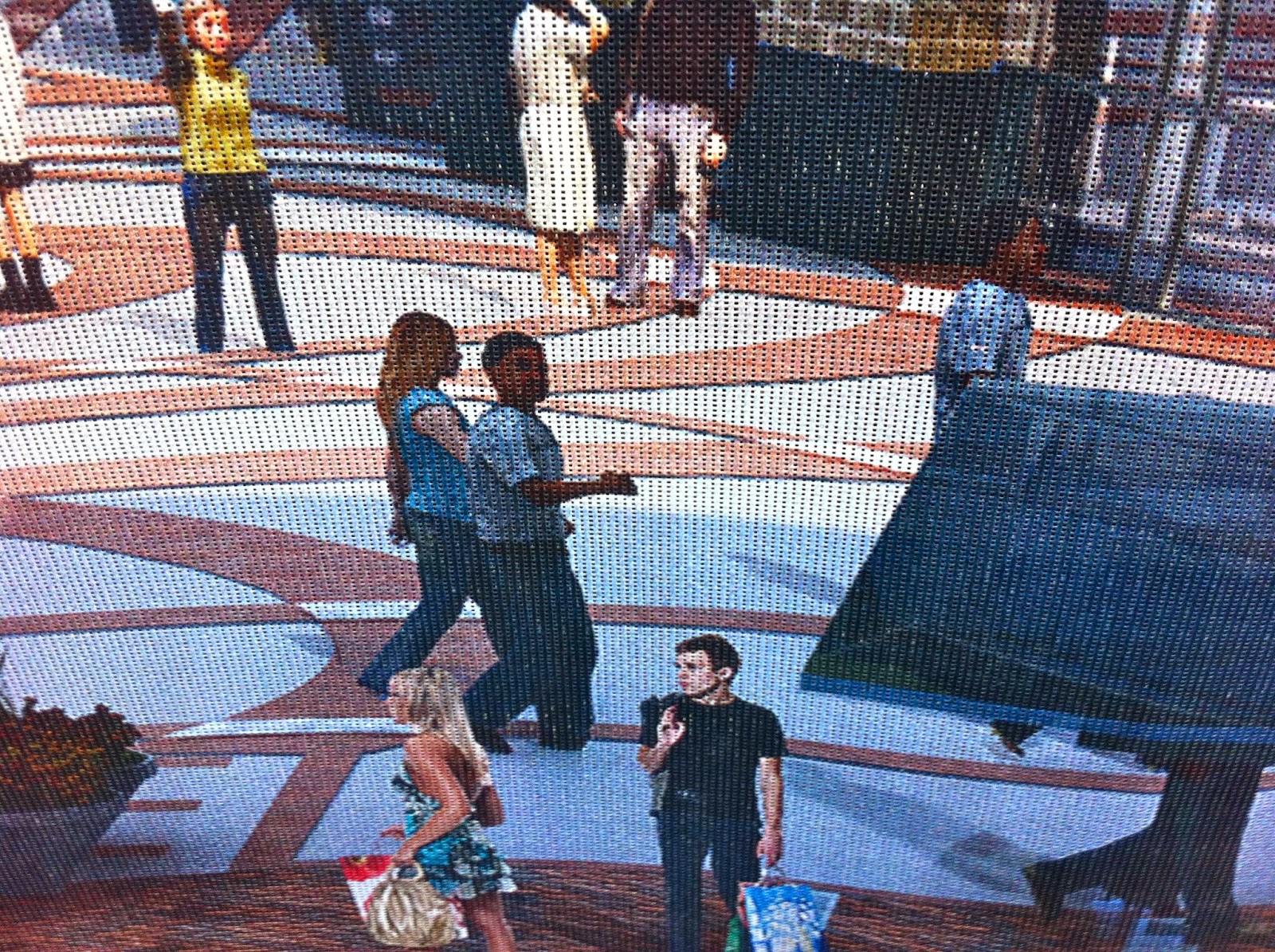 On Valentine's Day, some Walnut Creek restaurants were briefly taken over by a group of protesters who identify with #BlackLiveMatters or the #BlackBrunch movements.  One website said the protesters bullied and harassed white children, while someone participating in the protests posted a tweet, accusing Walnut Creek of building weapons of war against black people by "creating a white utopia."

One Walnut Creek friend was angry that these protesters were singling out the town for being racist or lacking diversity. I agreed that it wasn't fair for Walnut Creek to be singled out; there are plenty of other affluent suburbs around the Bay Area that are even less culturally and economically diverse. I figured the Black Brunch protesters targeted Walnut Creek because it's centrally located in the East Bay suburbs and because of the convenience of getting here via BART.

Still, you can't get around the fact that Walnut Creek is mostly white, according to 2010 Census figures. Seventy-eight percent of us identify as white.

Then again, that's lightly less than 2000, when Walnut Creek was 84 percent white. And, those 2010 figures show that Walnut Creek has become increasingly diverse: 15 percent Asian, 8 percent Hispanic or Latino and 2 percent African-American.

So with these numbers, showing that Walnut Creek is becoming more diverse, I'm wondering what to make of the almost totally white world depicted by the Broadway Plaza renderings. Hmm, is it possible the Black Brunch protesters had seen the "white utopia" these images depict? 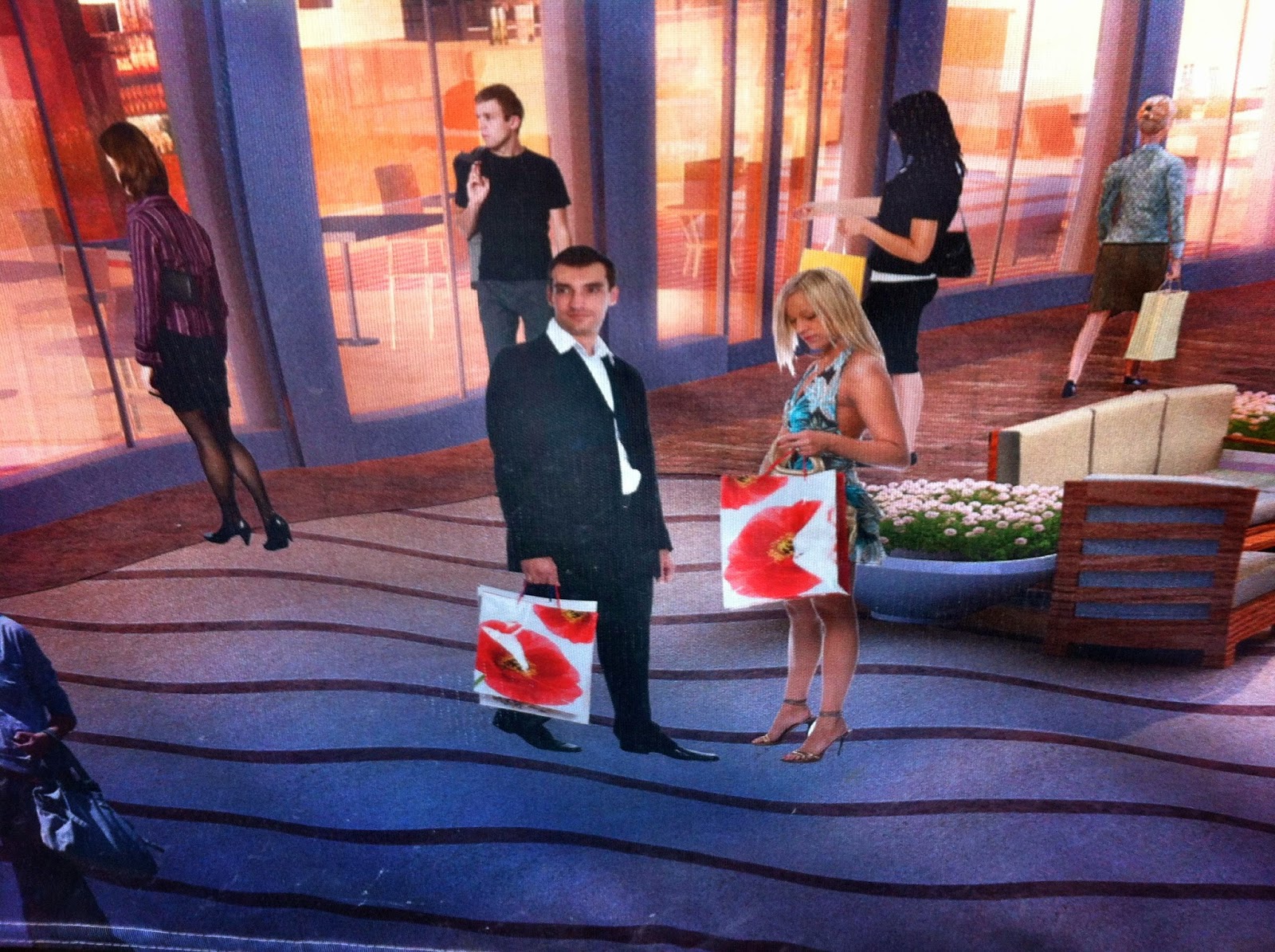 It also makes me think Broadway Plaza isn't in touch with the demographics of its own customers. On the day I was at Broadway Plaza, I saw a pretty racially diverse crowd -- not like the crowd in these pictures.

I also keep hearing about how entertainment and retail companies and marketers have come to recognize that diversity sells because ads and entertainment content with a range of characters and stories reaches America's increasingly diverse population.

Sure, it wasn't that long ago that advertising and entertainment, which tends to depict idealized, aspirational views of people and situations, used to almost exclusively present white characters or story lines. That still takes place -- on popular, acclaimed shows like "Man Men," for instance -- but, increasingly those days are dwindling, unless I guess, you're looking at a Broadway Plaza ad.

3 African Americans, one Asian and one Latino along with a handful of Caucasians. Seems like a standard racial mix.

Did you take a new 'journalism' course that taught you to use racial propoganda to catch the attention of the reader with devisve headline.

White utopia, what the heck is that? Disgusting piece of writing. Take another class.